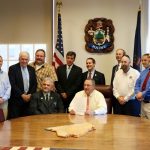 By Jacob Paulsen on October 15, 2015 in Reciprocity

On June 5th, 2015 Legislative Document 868 was signed into law by Governor Paul LePage of Maine. Described as “An Act To Remove Limitations on Reciprocity for Concealed Handguns Permits” the change removes the power from the state police to enter into reciprocity agreements and instead forces Maine to recognize any resident permit from any state that also […]

Continue Reading 0
By Jacob Paulsen on June 25, 2015 in Reciprocity

With the application of Nevada’s new law, SB175, they have now began to honor the Mississippi enhanced permit. As you may recall earlier in June 2015 Nevada added reciprocity for 12 states and we predicted that a few more would slip in. Congratulations to all those who have the Mississippi permit!

Earlier this month the Nevada Governor signed into law SB175 which, in addition to other changes, removed the requirement for a state to have “similar training requirements” in order for Nevada to honor their permit. On June 18th Nevada published an updated list of the states whose permits it honors and ten new states have […]

By Jacob Paulsen on June 5, 2015 in Reciprocity

By Jacob Paulsen on June 3, 2015 in Reciprocity Pennsylvania has recently added Ohio as a state whose permit will be honored in Pennsylvania. As we previously announced, Ohio’s law recently changed to honor permits from all other states and in doing so it would seem that they now meet the requirements in Pennsylvania 6106(b)(15) of the Uniform Firearms Act that grants reciprocity to certain […] [UPDATED 3-24-15] On March 23rd, 2015 a new Ohio law goes into effect. Ohio House Bill 234, signed into law by Governor John Kasich Dec. 19, 2014, amends a number of the state’s previously standing gun statutes. The change that effects the greatest number of people is that Ohio will now recognize any valid permit from any […]