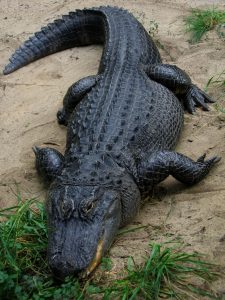 In Sumter County a shocking story as a 74-year-old man has been arrested after he shot and killed an alligator that attacked his stepson.

The Sumter County Sheriff’s Office reported Reginald Blanton shot the alligator twice with a  concealed carry handgun after he discovered his horses acting strangely and spotted a large alligator near them. At that point, Blanton’s stepson, 58-year-old Jack Hildreth approached the alligator.

Blanton said that he took his gun with him, because he was worried and did not know what was prowling around. When he saw the alligator just a few feet away from his horses, Blanton says he took out a 9mm handgun and shot it. “I shot at him four times, and they said I hit him three,” he said.

His stepson then arrived and got about eight feet away from the alligator when it suddenly attacked. “Whenever he raised up after my stepson, it looked like he was shot out of a cannon. I had never seen nothing like it,” Blanton said.

Hildreth said that he originally assumed the alligator was dead as he approached because it wasn’t moving. But it then grabbed his leg and gave him a severe wound.

Arriving Sumter County deputies surrounded the animal, and a licensed trapper killed it. Hildreth was then taken to an Ocala hospital and treated for severe injuries.

However, even though Blanton did not fire the killing blow to the alligator, he was arrested for unlawfully killing an endangered animal, and was taken to jail. He has since been released, but according to the family, they must now be forced to pay for Hildreth’s medical expenses and put up bail money for Blanton, as well as hiring an attorney.

All of this is met with many questions, due to the legality of the weapon being used, the fact that the alligator was an imminent threat, and that Blanton did not fire the killing shot. However, as of writing of this article, the matter was still ongoing and would be taken to court.