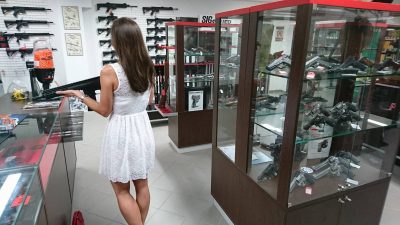 Lithia, Florida – A pregnant woman is credited with saving the lives of her husband and young daughter after masked intruders entered their home on Wednesday of last week.

The unidentified woman’s husband, Jeremy King, told Bay News his family was in their home at around 9 p.m. when two armed and masked men stormed into the home through the back door.

“They came in heavily hooded and masked. As soon as they had got the back door opened, they had a pistol on me and was grabbing my 11-year-old daughter. I’m telling them, ‘I have nothing for you, and they’re like, ‘Give me everything you got.’ It became real violent, real fast.”

The home invaders began to assault King, pistol whipping and kicking him causing multiple injuries. His wife, who is 8 months pregnant, came out to see what the commotion was about when she saw the men attacking her husband.

The mother retreated to a back room where she got out an AR-15 rifle and hurried back to the scene of the attack.

“When he (intruder) came toward the back door in her line of sight, she clipped him. He made it from my back door to roughly 200 feet out in the front ditch before the AR did its thing.”

At a press conference, Hillsborough County Sheriff’s Office said they discovered the suspects body lying in a ditch near the home but were unable to locate his accomplice.

King added that while he was severely beaten during the attack, his wife is the reason he and their daughter are safe.

“I’ve got a fractured eye socket, a fractured sinus cavity, a concussion, 20 stitches and three staples in my head,” said King. “Them guys came in with two normal pistols and my AR stopped it. (My wife) evened the playing field and kept them from killing me.”

There are no reports of charges being filed against the mother for shooting the intruders and law enforcement officials said the rifle was legally owned.

Rifles make better home defense tools then pistols and shotguns. When facing multiple home invaders, rifles have an advantage of a larger magazine capacity reducing the need to reload after engaging more than one target.

Additionally, 5.56/.223 bullets are more likely then either shotgun pellets, or pistol rounds to be stopped by drywall and other interior walls.

Learn the latest tactics and techniques for home defense with the Complete Home Defense – Tactics For Defending Your Castle and learn along with your significant other for the maximum benefit potential.