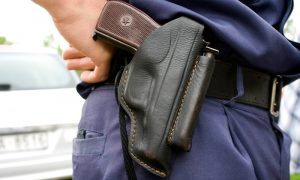 A Publix parking lot in Seminole was the scene of a bloody battle between 2 good samaritans, a female shopper, and a robber whose knife created the carnage. Luckily, this battle, while vicious with viscera, ended as quickly as it began due to a third samaritan and his gun.

The incident took place on the afternoon of August 6, at 12:40PM when Rosanna Lynn was sitting in her car in the parking lot of the Publix store, when Bobby Martin Watson, a 49-year-old man walked up to her car, broke in, and attempted to steal Rosanna’s purse.

A struggle ensued in the next few moments that ended with Watson producing a knife and stabbing Rosanna in the abdomen and thigh before running off.

Seeing this horrific act of violence occur, another man, Christopher McMann attempted to step in and put a stop to Watson’s violence, but was met with the business end of Watson’s knife, as well. This time Watson’s knife struck McMann’s back.

Normally a wound such as this would knock a person out of the fight, but this was not the case for Christopher McMann. Watson’s next attempt to escape was quickly followed by McMann as well as yet another party, Travis Jones. Both of which were now in hot pursuit of Watson.

At this point, 40-year-old Donald Rush saw the commotion from across the street and after seeing the blood and chaos, Rush decided it was time to put an end to this. So he took the next step to quell the situation in grabbing his handgun and joining in the chase of Bobby Martin Watson.

At this point, Jones and McMann managed to catch up to Watson and tackle him to the ground. However, he was still armed at this point, and unfortunately he managed to injure yet another citizen who was trying to help when his blade stabbed into Jones’ abdomen.

Now, after seeing 3 people stabbed Rush was in no mood to play around. After catching up to the struggle, Rush pointed his gun at Watson, disarmed him and forced him to stay put until the cops arrived.

All of the victims’ wounds were found to be non-life threatening after their trip to the local hospital and Watson was taken to jail for this heinous incident.

This story definitely showcases the power of the gun, as well as the even greater power of a well-trained civilian carrying it. Notice how quickly the man who would stop at nearly nothing was quelled by being at the end of a gun barrel.

What do you think of this story? Are you prepared to stop a threat such as the one Bobby Martin Watson posed in Seminole? If not, are you willing to get the training needed so you can?